I have long wanted to see the aurora australis (southern lights) from my home coast, but living in Victoria as I do, it seems I could be waiting for a while. Gazing south from some coastal vantage point on a moonless clear night and seeing the southern sky lighting up on cue with dancing curtains of green light (or some variation on that theme) is not a common event for Victorians. Those in Antarctica see them best of all. Residents of Tasmania and the south island of New Zealand see them regularly even if not frequently. It seems Victorians should really view themselves as lucky if they see one from their local coast at all. I may eventually decide that a better solution than waiting is to visit somewhere closer to the south pole.

But two nights ago, a rare opportunity to see the southern lights from Victoria (and places further south) was promoted with excitement by numerous boffins, their animation index peaking (excitement is a relative concept, but I could tell they were excited about breaking this news to an aurora-hungry population of Victorians and others). This was in stark contrast to the kp numbers (a scale of 0-9 where 9 is a strong geomagnetic storm with visible auroras likely) which were excitingly high, but started to drop off as soon as my alarm sounded at 3am yesterday.  Should I go back to bed after seeing these disappointing numbers? Well, I was already awake, the moon would soon set, the sky was completely clear of cloud, and while the air a little chillier than I would have preferred it was tolerable in appropriate snow clothing including thermals, neck muff and NZ possum hair hat (9°C wind chill 7°C), so I decided I would not ignore the advice (promise?) of some, umm, unknown persons and unidentified organisations on the internet that this was the morning I would see the aurora. I stoked the wood fire in readiness for my weary and chilly return after dawn and drove a short distance to where I took up position in long dewy grass on a small cliff on the Great Ocean Walk overlooking a beach, a reef and the Southern Ocean. A refrigerated light northerly on my back prevented overheating.

Following the anonymous but unanimous advice online that 3am-5am would be peak aurora viewing time for Victorians on Friday, I positioned myself in the cold and dark by 0315 with my camera on its tripod and pointing south. As my eyes adjusted to the dark,  I realised it wasn’t all that dark, thanks to what must have been a noteworthy astronomical event in itself – the brightest moon for quite a while. The sky was bluish, and the Milky Way and the rest of the star show a little dim as a result. Apparently an aurora can be so faint that a glance at your luminous watch numerals can ruin your night vision and deprive you of your next ten minutes of aurora viewing as your eyes re-adjust. Even on a moonless night the naked eye (pluralise if that better fits your particular eye situation) may not be enough to allow you to see the aurora show in full flight or at all. So with a near full moon on a cloudless night that was outdoing the MCG night lights, I realised that until 0501 (forecast moonset time) I would have to fill in time by taking photos of the Milky Way, while monitoring the gradual onset of my hypothermia. As it turned out between 0501 (moonset) and sunrise was the most productive time, not for aurora photography but for Milky Way and dawn photos.

The photos below appear in the order in which they were taken, between around 0330 and a bit after 0700.

A mysterious thing happened with some of the images taken from Marriners Lookout between first light and sunrise. On the viewing display on the camera I could see a faint but unmistakeable green arc of light which may or may not be from the aurora australis. It was where the aurora was meant to be, it was the right colour, and there was nothing else in the heavens casting an arc of light of this colour, dimension, proximity to the horizon and orientation. Further, I have taken a lot of dawn photos and never seen a green arc such as this associated with the gradual spread of morning light from the east. It was invisible to the naked eye, but recorded nonetheless by the sensitive light sensor on the Nikon D810. The mysterious thing was that the faint green arc of light visible on the image on the camera display, was not visible on the downloaded image on my computer.

Each of the two images below is a photo of the actual display on the back of the camera of the images on my camera memory card. These photos have not had any editing or post-processing whatsoever. It is far from the mesmerising display of coloured light dominating the southern night skies that I’d hoped for and that I would associate with the aurora. But I have seen similar single green arcs on photos confirmed as capturing the southern lights. It may however be some reflective or refractive effect above the boundary area of the advancing morning light. Or it could be an artefact of the camera optics or the digital photo process. I will seek expert advice on this.

Update: the experts seem to agree that the source of the green light was not an aurora. There are numerous speculative explanations for the green light on the image (along the lines I suggested above), but an aurora is not on that list. My novice status as an aurora hunter is confirmed. 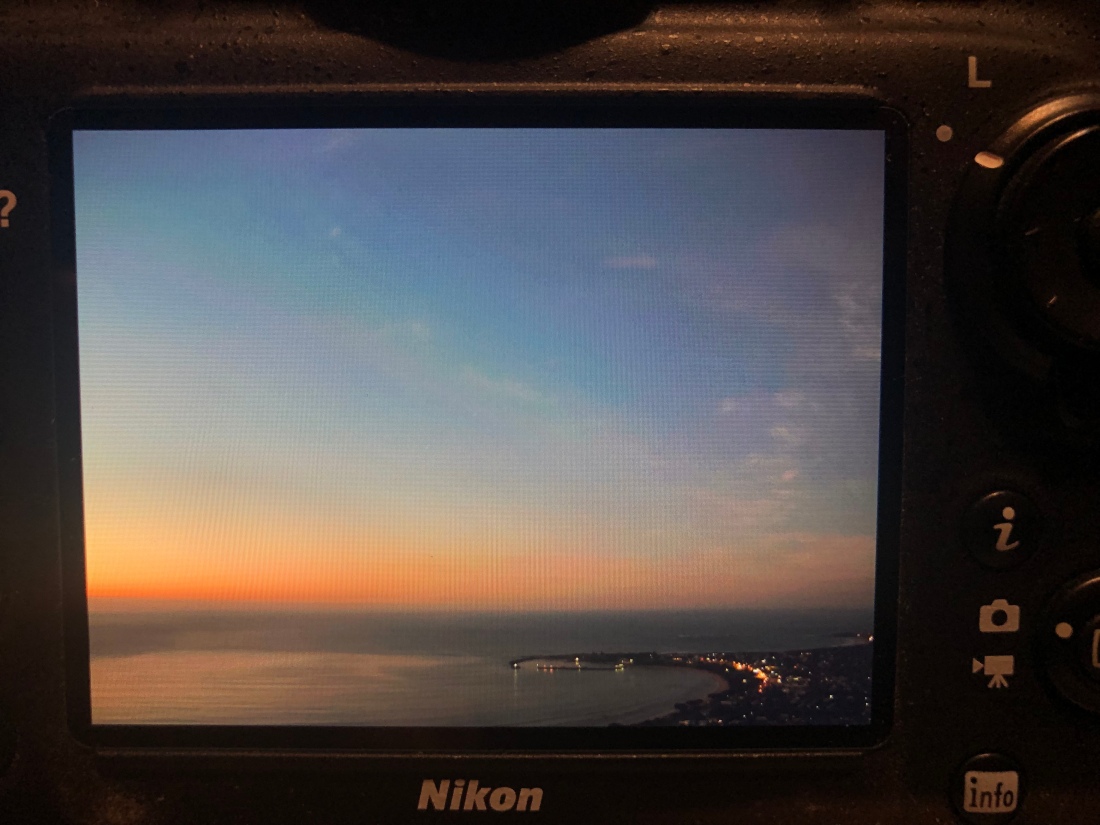 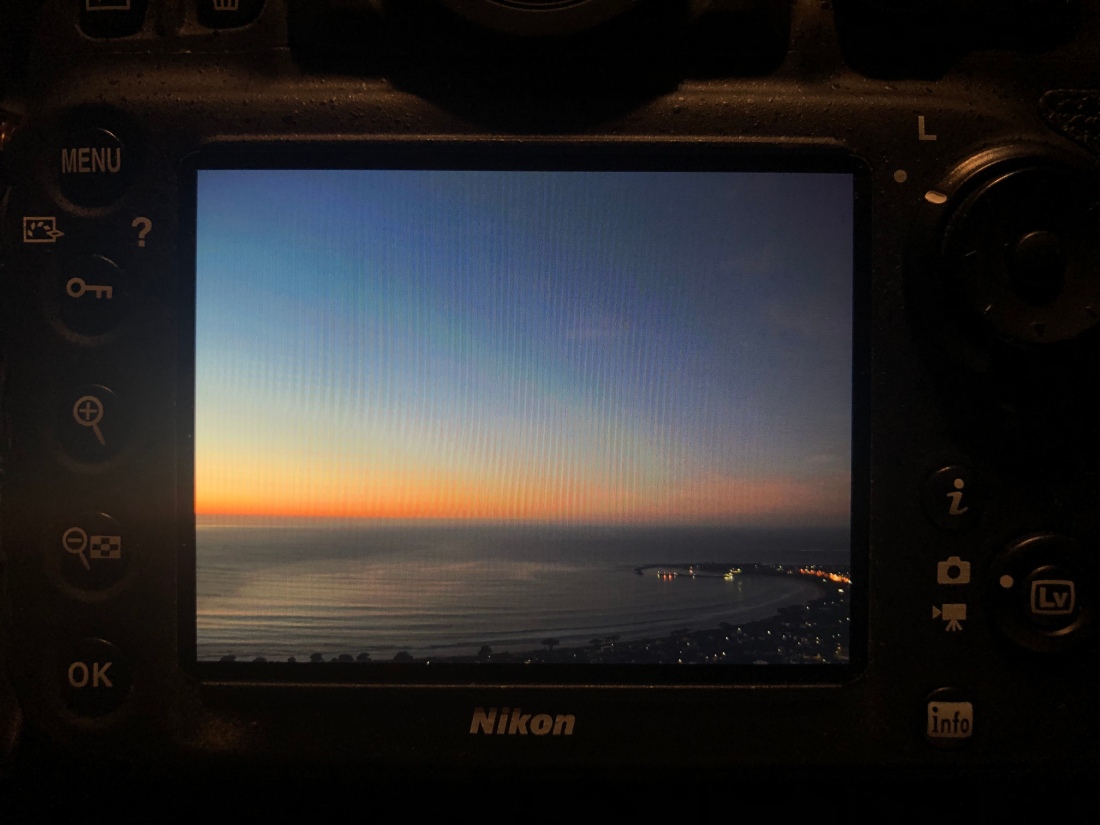 Seeing the full show of the southern lights remains a tantalising and elusive goal. But spending some hours on a clear dark night gazing south from Marengo or Marriners Lookout, with meteors occasionally blazing across the skies and the grand arch of the Milky Way scintillating overhead with countless stars spread from horizon to horizon in every direction, is always a wonderful few hours. Then there is the sunrise. All this is available every single night the sky is clear, yet it always feels such a privilege to be on some lonely and chilly vantage point to see it.