Cockle Creek in Recherché Bay is remote. It’s the most southerly point you can drive to in Australia. It’s below the 43rd parallel of latitude in the direct path of the roaring forties. It is closer to Antarctica than Cairns. The next land mass to the west is South America, and to the east New Zealand.  It sounded to me like a good spot for a swim.

Our overnight accommodation on our way south from the Bay of Fires to Cockle Creek was at the very comfortable Wave Station near Middleton. It faces Bruny Island, over the interesting waters of the D’Entrecasteaux Channel. The few shacks at Cockle Creek are in a quite different architectural style. 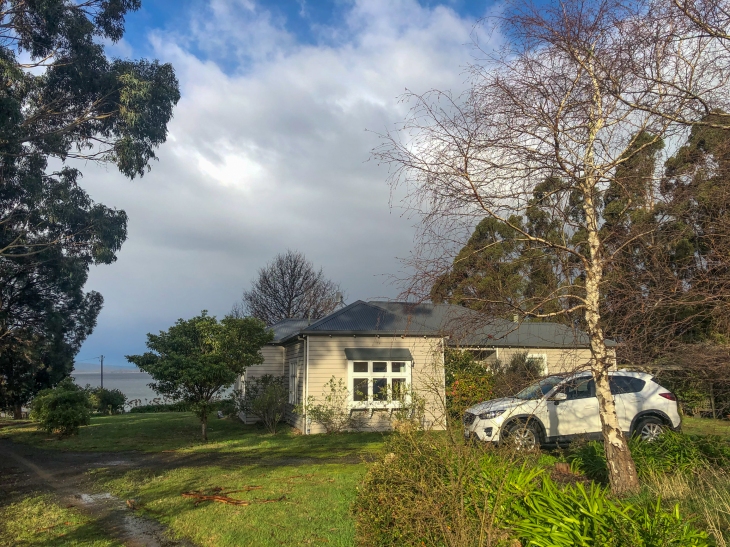 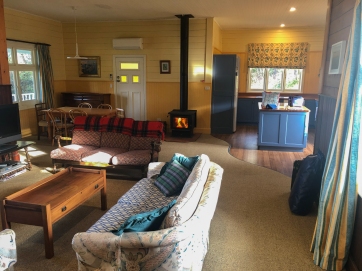 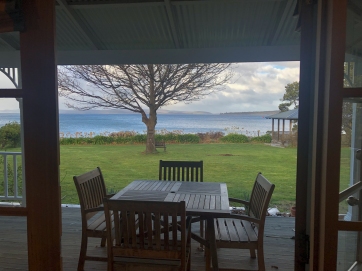 Across the western mountains to the west coast

We drove from Cockle Creek to Strahan on the west coast via Queenstown and Derwent Bridge, with an overnight in Huonville en route. There is a 90km stretch of the Lyell Highway from Derwent Bridge to Queenstown which crosses some high country. It is regularly snowed-in during winter, and icy roads are common. But we crossed the pass with no problem, finding only roadside remains of snow clearing activities last weekend. There was snow on the highest of the surrounding peaks.

The Arthur River flows into the Southern Ocean at the small settlement of that name. This settlement is on the lonely north-west coast of Tasmania. It faces due west and gets the full brunt of the roaring forties sweeping in from the Southern Ocean. There was a near gale blowing when we arrived.

The Arthur River flows to the sea from deep in the heart of the Tarkine temperate rainforest which is the largest temperate rainforest in Australia (over 400,000 hectares of virgin wilderness) and the second largest in the world. Fallen trees from this forest which find their way into the river, make the distance to the estuary. The result is logs on the beaches, the river shores, the rocky reefs and most alarmingly for boats and swimmers, in the sea. It would be a whole new level of risk to see a 60 foot log dropping in on you on a wave. I imagine that in heavy seas, timber of this size could sink or capsize a small boat in an instant. It could certainly ruin a good body surf.

Marrawah on the north west coast of Tasmania

Marrawah is a small farming centre 17kms north of Arthur River, located near the long curve of Anne Bay. The land is impossibly rich and green, and the green foreground in the photos below is a paddock on a working farm on which our rented cottage was located.

Postcript: At Cradle Mountain we visited the premises of a breeding program aimed at increasing the numbers of healthy Tasmanian devils in the wild. They also have a breeding program for the spotted quoll, another carnivorous mammal and a direct competitor with the Tasmanian devil in the wild. (These are only iPhone photos, but better than nothing). 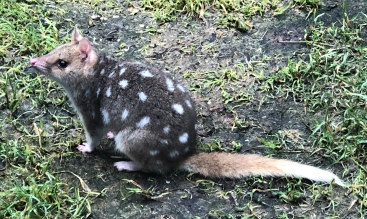 7 thoughts on “Cockle Creek to the West Coast of Tasmania”