Last Tuesday, as always, Maxie eased himself out of the warmth of his dog bed, and stretched his creaking joints slowly with a few steps as he confirmed that the gift of walking was his for yet another great day.  All of Max’s days were great.  He stopped in the kitchen doorway where he knew I would pick him up for his first cuddle of the day.  I did so.  Our respective days were going to plan.

I scooped him into my arms where he relaxed on his back waiting for me to lift him up a little further so he was in range to give my ear a quick lick.

Then without warning or sound, deep within the delicate and intricate mysteries of Maxie’s brain, as I held him in my arms there was a silent but catastrophic event which caused him to move his body and legs involuntarily and to arch back with a momentary unseeing look in his eyes.  Then as suddenly as they began the violent movements stopped and he just lay quietly looking up at me as I held him tightly to me.  I placed him gently on his feet on the floor to see whether hope against hope it was a temporary fit of some sort which would not disable or kill him.

His back legs barely functioned, his balance was clearly affected, he stumbled a few steps and stopped bewildered and just looked up at me.  For nearly 15 years I have been able to make it right when he came to me and stood at my feet looking up with entreating eyes because he was unwell, or had something stuck in his mouth, or had hurt his foot, or was just out of sorts and needed a cuddle.  I gently picked him up again.  But I sensed that I might not be able to make it right this time.

Lizzie was with us by this stage.  After hearing what had just happened and seeing him try to stand and walk, with a teary calmness she said, “I think his time has come.” Maxie’s lifelong vet wouldn’t be open for business for another hour.  Max spent that hour in our arms, calm but sadly quiet and still.  He was not in pain.  We were.

Liz’s diagnosis was confirmed by the vet and our Maxie’s life ended quickly, quietly and painlessly in the surgery with Liz right beside him.

Max, you were a real character, and you made our life better.

You only ever had good and kind thoughts.

You loved us unconditionally. 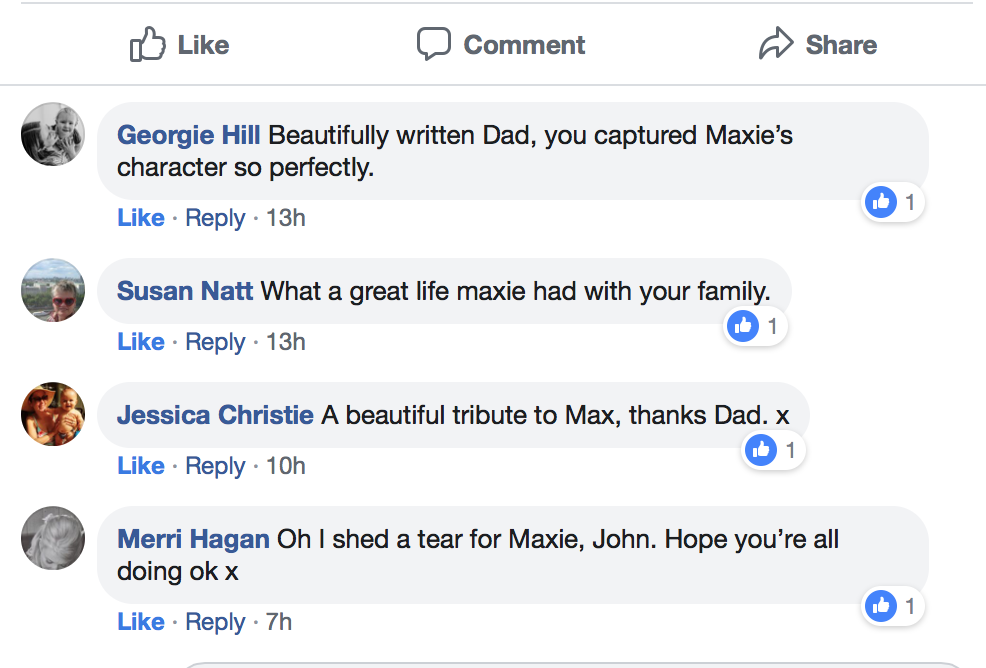