Two Mile Reef (also known as Easter Reef) is located west of Port Campbell.  On its day, it is considered by many to produce the largest wave on the Victorian west coast.

On 4 May 2016 having looked at the swell forecasts, weather forecasts and a few other pieces of guesswork on the internet, I decided it could well be worth the two and a half hour drive from Melbourne to see Two Mile reef in action.

It was worth the drive.

In terms of big seas in this area, I can recall a day when I witnessed the white water being being launched higher above the cliffs than was occurring on 4 May 2016.  That day was 2 July 2008 when gale force winds and big seas combined to launch white water well above clifftop height.  The white water rising above the cliffs was clearly visible from the car window on the Great Ocean Road.  I have posted some photos taken in the area that day on a post on this blog: https://southernoceanblog.com/2017/06/28/wild-weather-a-big-swell-on-the-coast-west-of-cape-otway/

But it’s the green water not the white water which excites the surfer.

I have never seen a day on the west coast of Victoria with a raw surfable swell as big as the one I saw this day.  There was a surprise bonus for my efforts in that a well known big wave surfer had also made the trip to Two Mile that day, and was out there towing into a few.  What impressed me more than his efforts though was the local crew who paddled out, paddled for and caught more than a few massive waves, got caught inside more than once, took more than a few on the head involving some longish hold downs, then paddled back to shore.

Save for the last photo in this post, I have followed the pattern of wider shot, then cropped detail of the same shot to allow better appreciation and estimation of the size of these waves.

These photos were taken on an old digital SLR I owned at the time (a Nikon) with only a small zoom lens, my telephoto lens having ended its active service when I slipped on a wet seaweed-covered rock shelf and landed flat on my back trying to walk as fast as a Southern Right whale which was swimming by at close quarters.  Accordingly the resolution etc is nothing like my current camera and telephoto lens could have produced.  But I had to work with what I had.  A photograph can be aesthetically pleasing, technically excellent and of considerable interest for its documentary value. If the planets align it can tick all three boxes. These photos are merely in the documentary category.

I decided to post these photos of the swell of 4 May 2016 because my last post on this blog:

caused more than one conversation with friends on the west coast as to big swell events in years gone by.  Of course I couldn’t leave any such conversation without mentioning the swell at Two Mile on 4 May 2016.

So here are a few snaps taken on that day.  How big were these waves? I guess the answer depends on which wave-height estimate method you use.  Many surfers look at a wave with a 20 foot face and call it a solid 8-10 footer.  But for my money, the distance you fall if you come unstuck on the lip seems a reasonable measure. 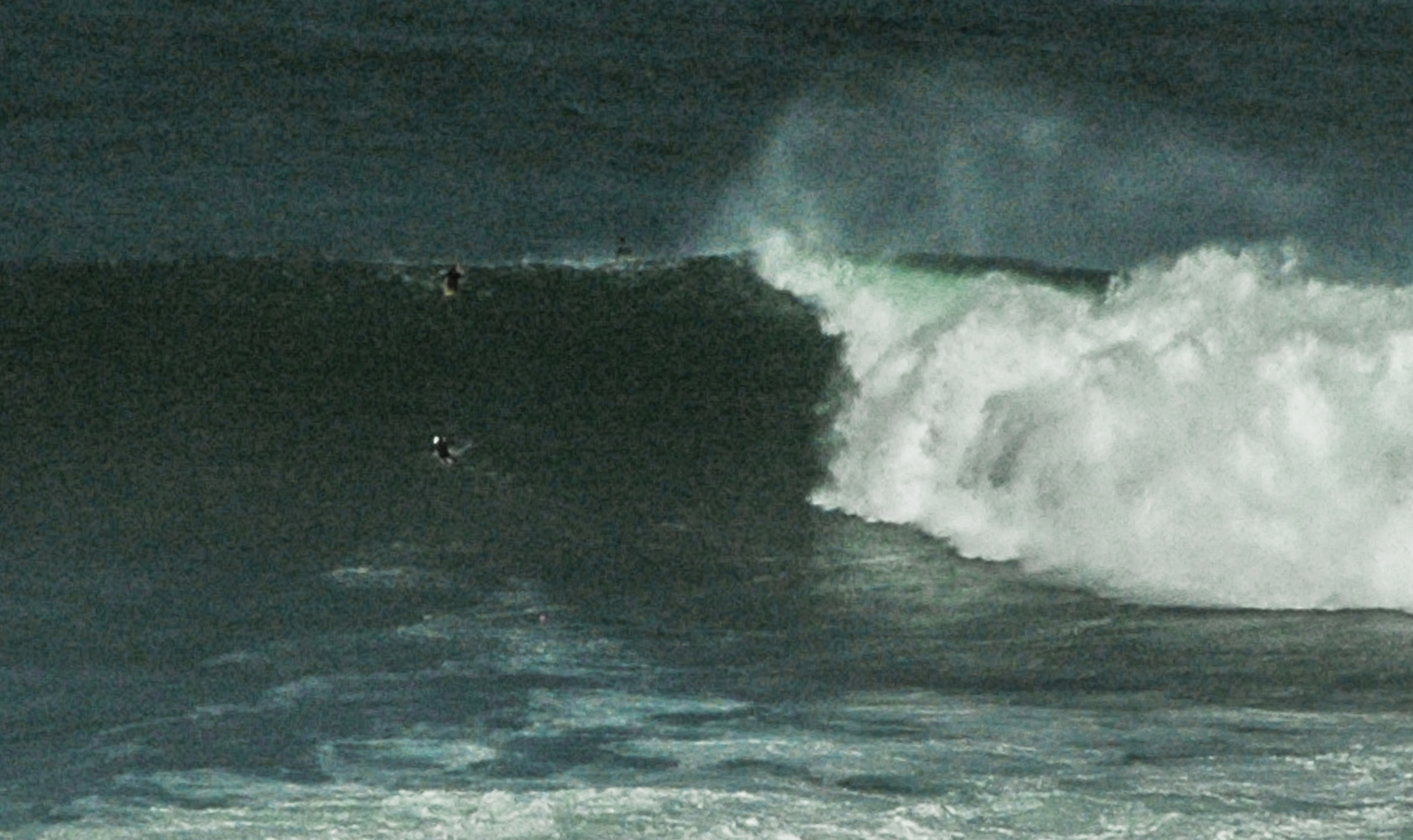