A few random thoughts of mine on sharks and ocean swimmers, prompted by discussions with friends about a shark sighting at a nearby beach 5 days before a planned swim there with a group of friends last summer.  This post is nothing more than a description of my approach to the fact of sharks being in the ocean in which I swim all year round.  I have no relevant qualifications and I am not an expert on this topic.  As the research on point continues and the learning on the topic evolves, it is inevitable that some of my views, theories and half-baked ideas described below will change.

Generally, much more thought and talk is given to the shark as a concept than to actual sharks.  This is because the idea of a shark is available without limit and unrestricted by facts, whereas actual sharks are in rather short supply and each is constrained by its individual facts (big, small, friendly, unfriendly).  Most people have never seen one in the sea.  Fewer have seen one while they were in the sea.

But someone with a mobile phone did see this one from the Lorne jetty, and took brief footage of it.  It is indistinct in form and detail, and indeed its swim was unremarkable being parallel to the jetty then out to sea towards Point Grey and the Southern Ocean.  But in the absence of anything more specific as to appearance or behaviour, in the minds of some it can quickly become ‘every-shark’,  replete with qualities as unconstrained and varied as the imaginations of those who see or hear about the footage.

For what it’s worth, I believe the shark sighted was a great white, in the order of 8-9 feet. It was reported that it swam near people in the water by the jetty, and ignored them.  I reject the hyperbole of journalists who in relation to this shark threw all caution to the wind and delved into their journalists’ thesaurus of shark-story words, coming up with the usual “massive” and “4 metres long” and “close call” and “shocked locals” and “stunned onlookers” and “shark menace” etc.  My favourite was the “one-kilometre long jetty” at Lorne.  200m is the actual figure, but when you are a journalist in shark-reporting mode, it seems all things grow.

The first impression on seeing the great white in the next picture was that it effortlessly emanated poise and supreme confidence.  Of course it did.  In design, function, aesthetics and presence the great white is patently perfectly evolved.  There is no room for improvement of this creature.  This probably explains how it has survived a number of the world’s mass-extinction events.  It is perfectly streamlined and its tail and fins in appearance and function reminded me of the control surfaces on an aircraft.  The tail is just the final point of delivery of the great power it possesses to move at surprising speed through the water.  The shark’s body (I keep wanting to say fuselage) seems to be all muscle and propulsion  from the gills back when accelerating.  For cruising, a  slow but powerful sideways movement of the tail suffices.

When a shark is sighted somewhere near an area where frequent swimming occurs,  swimmers seem to divide as to who cares and who doesn’t care that a shark was sighted a day or a few days ago.  My view (shared by many that I know of) is simple – shark sighted Monday evening, swimming is OK from Tuesday on.  Friday is fine.  Most experienced ocean swimmers I know share this view.

As things turned out, the planned xmas swim 5 days after the shark sighting went ahead as planned.  No sharks were sighted, nor was the topic raised on the day, and the weather gods smiled on us (the forecast easterly conditions did not eventuate).  We swam in brilliant sunshine, with a long-period rolling green swell propelling us in regular and perfectly timed instalments towards the shore.  The shore break was good enough to body surf, and the rip in the corner was easily avoided.  The group deemed it a safe and reasonable time and place to swim, and we were right.

Managing the risk that sharks can pose is something most ocean swimmers think about, even if they do not talk about it all that often.  People who don’t swim in the ocean a lot seem prone in my experience to raising the topic in conversation while actually swimming.  More than once I have been asked by such occasional and concerned swimmers,  while swimming some distance offshore, what I do to manage the ‘shark risk’ (as they see it).  I invariably respond that I am doing it right now – swimming with another person, thereby halving the chance of me being the one eaten by the shark.  I’m not sure what comfort it gives, but it usually ends that conversation.

I have played in the surf since I was a young boy, and absorbed information about sharks along the way, some of it reliable, some not.  Deciding what is reliable and what is not can be quite a challenge.

In responding to the risk of sharks, I generally draw on the following idiosyncratic bunch of ideas (untested, most not evidence-based, many possibly wrong) and experiences –  they’ll do me until something better comes along:

One piece of advice I do offer is to do all your contemplating about shark risk on the shore.  Once I have made a decision to swim at a particular location, and I hope that by applying some or all of the above it is an informed and reasonable decision, I stop thinking about sharks for the duration of the swim.   I swim happily without giving them a further thought.  The reason is that in my view there is no such thing as swimming and keeping an effective lookout (from water level) for sharks.  They are perfectly evolved hunters and you will not see them coming.  Even if you did, there is nothing you could really do to save yourself.  It is totally unproductive to think about unseen sharks while swimming – it will only induce a case of the willies.  So having carefully decided to swim on any given day, while swimming you may as well act as though they are not there at all (which given the assessment process I adhere to will hopefully be the case).

In the case of the xmas swim at Lorne following the shark sighting off the Lorne Pier five days earlier,  I together with my fellow swimmers applied the simple reasoning of ‘shark sighting Monday, swim on Friday, no problem’.  I swam the 1200m essentially on my own with another 15 swimmers spread across the southern side of Louttit Bay, and did not once think about sharks.  It was a most enjoyable swim.

I accept that it remains possible that I could be eaten by a shark. It cannot be denied that the only way to eliminate the risk is to stay out of the ocean.  All I have to say about that possibility is that I have seen the prospect and process of dying by slower means with many friends and some family, and something swift, clean and making a good headline seems hard to fault – just not on my next swim though.  As already touched upon,  I believe the (carefully managed) risk of riding a motorbike down the Great Ocean Road carries a higher risk of injury or death (but still at an acceptable level) than swimming a few hundred metres offshore at my favourite ocean beach.

I subscribe to ‘Dorsal Shark Reports’ which on 20 December 2016 published this report of a sighting of a Great White at Fishery Bay yesterday afternoon. It was obviously a truly large specimen. 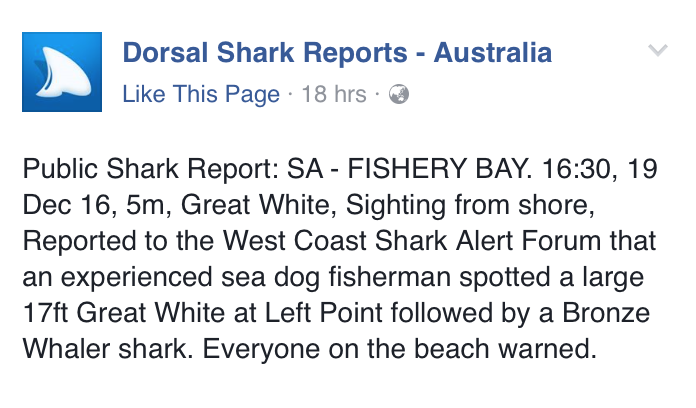 Right Point at Fishery Bay is fixed in my memory by the story I heard (from the crew of the Calypso as we travelled out to the Neptune Islands for a shark cage dive) when I travelled to Pt Lincoln in 2015 of a surfer who was attacked while surfing there a few months earlier. This extract from social media gives a thumbnail sketch of the incident.

A more detailed report can be found at:

The surf board with leg rope and severed leg still attached were retrieved from the beach a few days after the attack.

It is a graphic tale of a shark attack and a heroic rescue and survival story, with features which no fiction writer would dare include.

Please feel free to respond using the comment link below, with your experiences, advice, half-baked ideas and gut feelings in relation to swimming in the same ocean as sharks.